While some emergency managers are embracing social media, others are still avoiding it. However, social media has emerged as an important tool for emergency managers. Emergency managers are using social media as a preparedness tool to engage the community, help with public information and as otherwise aid in dissemination of the preparedness message.  In addition, social media is emerging as an important tool for situation awareness during the response and recovery phases of an emergency.
It is important, in using social media for all phases of emergency management, to understand that it is not just about Twitter.  However, Twitter has clearly emerged as the most significant platform for emergency management engagement and situational awareness.  Twitter is simple; it is a micro blogging tool which is limited to 140 characters.  Anyone can follow what anyone else has to say.  This stream of  data (the Twittersphere or Twitter Stream) can be overwhelming based on the huge volume of silly Tweets that populate the stream.  However, the use of a “hashtag” (a short term preceded by the hash or # symbol) makes it manageable.  In addition, there are many Twitter aggregators and trend monitoring websites available; these use a variety of tactics to filter out what’s important or of interest to emergency managers. Currently some better software tools are emerging which may help automate the monitoring process.  Any monitoring or use of the Twittersphere will ultimately need to use hashtags.


Hashtags are good to understand but hard to control; some say that hashtagging is a subtle art and I would have to agree.  As a user-defined tool, hashtags are both organic and rapidly evolving and there is no way to control them but there are some established ones to use and follow related to emergency management.  People will just start using a hash tag that seems to make sense given an emergency (Ex” #Joplin, #tornado, or #Earl) or use common terms like #hurricane. Hashtags help the public and emergency managers alike follow the conversation to see what I relevant to the event.  It will be interesting to see what emerges as an effective way to integrate Twitter and other social media in emergency management but it is clear that Twitter, Facebook and a host of other tools are here to stay and these have already impacted the world of emergency management greatly.
Here is my list of commonly used hashtags (updated and in order of preference).
Hash Tag List
Emergency Management and Homeland Security
#HSEM – Homeland Security/Emergency Management - This is my clear favorite and it is becoming the preferred tag to use by many in emergency management and homeland security.  It is broad in meaning and well used.  In fact, the following hashtags are underused or used for different subjects as noted below.
#Disaster – Disaster related (also used often for trivial things like, “My hair is a #disaster!”)
#UASI – Urban Areas Security Initiative and anything relevant to those in UASI programs (past or present). Note: This started as a tag for the UASI conference but is now used to talk about relevant topics and Drive the #UASI Daily paper. However there are not many posts using it currently.
#DHS – Department of Homeland Security
#EM, #Emergency – Emergency Management – Used for many other (non emergency management) things and not used that often now for emergency management.

#Homeland – This used to mean that a post was related to Homeland Security but this has now been overtaken by those discussing the TV series Homeland and other things that are not relevant to Homeland Security. Instead, I suggest that you use #HSEM, #UASI, or #SMEM as appropriate. (This drives the #Homeland Daily but that is now all about the TV show.)

Popular posts from this blog

November 22, 2012
I saw this on Google+ and wanted to share it. I do not know Frantz but I'm thankful for his sharing it.  Happy Thanksgiving everyone. - Steve  LIVING THROUGH SANDY by Frantz Ostmann on Saturday,  November 17, 2012 at 7:13am  1. The excitement and coolness wears off around day 3 2. You are never really prepared to go weeks without power, heat, water etc. Never! 3. Yes it can happen to you. 4. Just because your generator runs like a top, does not mean its producing electricity. 5. If you do not have water stored up you are in trouble. a. A couple of cases of bottled water is “NOT” water storage 6. Should have as much fuel as water a. Propane b. Gas c. Kerosene d. Firewood e. Firestarter, (kindling, paper, etc) 7. Even the smallest little thing that you get from the store should be stocked up.. (spark plug for the generator, BBQ lighter, etc) 8. If you are not working, chances are nobody else is either. 9. I was surprised how quickly normal social behavior goes out the window. I am
Read more 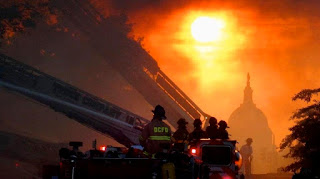 In part two of our blog " What is an Emergency Management Consulting Firm? ", we take a look at what a typical emergency management consulting project  looks like. Our typical emergency management consulting projects are designed to help local agencies or businesses prepare through a cycle of planning, training and exercises. We help our clients prepare for, respond to, and recover from disasters. All Hands Consulting's "Cycle of Preparedness" We also evaluate how well response and recovery plans work through after action reviews and improvement plans to address areas needing improvement. After Action Reports (AARs) and improvement planning is typically done after a real life emergency or an exercise . All Hands helps our clients develop and implement Comprehensive Emergency Management Programs and Plans through a series of steps including Emergency Management Program Review, Capability and Gap Assessments, and Strategic Planning. W
Read more

August 03, 2014
I wanted to make everyone aware of a free resource (with no commercial agenda) that is now available to the Search and Rescue (SAR) community. This is a project that was developed by members of the SAR community who simply have the desire to make SAR personnel more effective searchers. The web site is supported through an endowment. International Search and Rescue (ISAR) Alliance Training Library The Frank Parker Training Library [1] is made up of a set of structured instructional modules designed to be used by Training Officers to help them to train personnel in “how to search”. These modules have been crafted by Dave Perkins and Pete Roberts, the fathers’ of “critical separation” and other innovative search field skills. All the documents in this training library are free. Visit the ISAR Alliance web site at ISARAlliance.com   and click on “ Training Library ”: The aim of these training modules are to achieve certain “how to search” proficiencies.  The
Read more